As Diverse as the Diaspora: AAPI Women Share Their Hair Stories 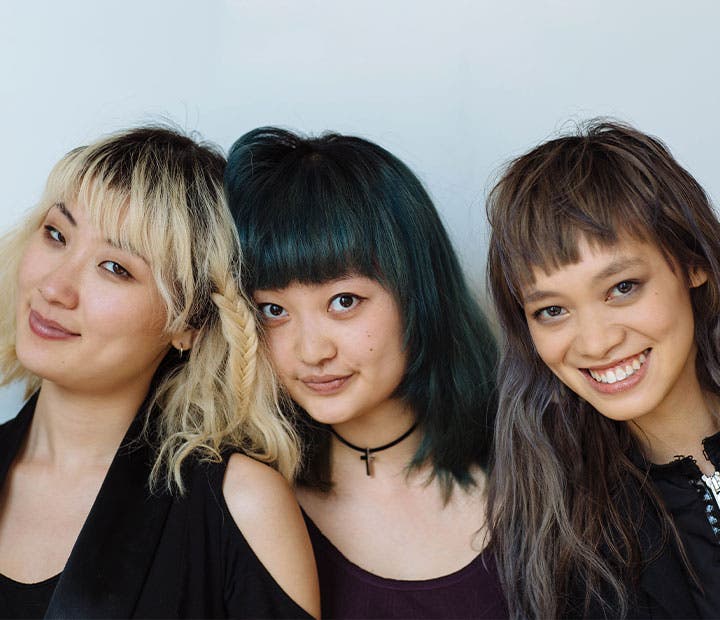 When people outside of the AAPI community think about Asian hair, they typically jump straight to imagining someone of East Asian descent with a thick, dark, straight curtain of hair.

And yet – the Asian diaspora spans 48 countries. When you stop to consider that it covers half the globe and includes billions of people in its numbers, why would anyone believe they all look alike?

Asian people have very different complexions, even within the same regional area. Asian hair might be thick, fine, wavy, stick-straight, curly, or any combination.

Just as there is no “standard” Asian person, there is no “traditional” Asian hair. It’s important to combat stereotypes and acknowledge the diversity throughout Asian communities.

So in celebration of AAPI Heritage Month, we spoke with women in our Hairstory community to hear their hair stories and clear up some common misconceptions about Asian hair.

Myths and Misconceptions about Asian Hair

The most common misconceptions about Asian hair stem from what we described above: people tend to envision only one type of Asian person. Some of the most common include:

These widely held beliefs are partially a result of inadequate representation within the media, as Asian celebrities like Lucy Liu do fit into that stereotype of having light skin and straight, black hair.

While Asian representation has greatly expanded in recent years, even the blockbuster hit Rich, Crazy Asians had its share of stereotypes, (think: label- and status-obsessed socialites). Other common, one-note characters include the geisha, who is prim, sensual, and exists to serve others; the deceitful “dragon lady,” and the overly strict “tiger mom” figure.

There’s also been a trend in the entertainment world of using colored hair or highlights to differentiate “rebellious” Asian characters, which is problematic for several reasons. Using hair color to visually set an Asian person apart can indicate that anyone who doesn’t use color on their hair fits all Asian stereotypes, including subservient rule-followers.

This Japanese-American graphic artist can attest to the myths: “A myth about Asian hair is it’s all the same – long, straight, black, right? Mine was never like that. Both my kids came out with pretty brown hair.”

As a Japanese woman, she’s had to untangle some of her own social conditioning. “Japanese people love hair. There’s a saying that a woman’s hair is her life. So I always thought hair had to be really complicated.”

Now, she’s a fan of simplicity and replaced her entire family’s shampoos with New Wash. “The ingredients are clean, and I don’t have to worry about anything gunking up our hair. It takes care of my whole family.”

Amy uses Hair Oil to moisturize her ends and Powder to allow her to extend time between washes. “My hair story is a very full story,” she says. “Get it? I have a lot of hair, and it’s a full, complicated, nuanced story."

This Filipina fitness instructor recalls how from a young age, the way she felt about her hair affected her confidence.

“I was born and raised in the Philippines,” she says. “When other kids would go places, they would have their hair up in pigtails or braided, but mine was too short. The reason I had short hair – literally boy's cut hair – is because we had lice. So my mom and my aunt would cut our hair really short or send us to the salon to get rid of the lice. I remember being 13 years old with that really short boy's cut that wasn’t the norm at the time, and I didn't have the confidence to embrace myself.”

Over the years, she’s learned to accept her hair, which she describes as “fine without much volume.” She’s come to appreciate how easy it is to style and celebrates her hair’s ability to hold curls and various other styles.

After years of coloring it – something she learned from her family and friends, who also colored their hair – Christine has also come to accept her natural hair color. “Three years ago, I realized that I could continue to put these chemicals in my hair, or I can just accept it. Self-love, self-acceptance. Since then, my hair has never been happier.”

Christine raves about New Wash, emphasizing it’s “the most amazing thing that I’ve done for my hair.” She recommends other Asians check out Hair Oil as well. “From the moment Hairstory launched Hair Oil, I was so excited because I know the importance of oil – not just for our skin, but especially for hair. I use mine after showering. I’m just so happy that I found Hairstory!"

Chan echoes the self-acceptance theme in Christine’s story. An Indian-Canadian content creator, Chan remembers receiving a lot of negative comments about her hair when she was young.

“Honestly, growing up as of the few people that actually embraced her curly hair, I did get a lot of comments about it, saying that it's too frizzy, that I need to comb it out, that I look messy, that it's tangled, or that I'm going to get knots just because of the texture,” Chan recalls. “Those comments were coming from a lack of education and understanding of curly hair and texture. “

Chan points out that – as with negative stereotypes surrounding natural hair in the Black community – many people in the South Asian community feel negatively toward curly hair. “They think it’s not the most presentable, that you look wild because your hair looks wild and so big and untamable. That’s completely false, sister. You just need to update your curly hair routine.”

Chan is a fan of her hair. “Frizz and all,” she emphasizes. “I think it’s beautiful. It’s so healthy and thriving, and the curls are popping. It’s moisturized. It’s growing. I love everything about my hair and I go curly almost every single day now.” She relies on New Wash and Hair Balm to not weigh down her already-heavy hair and keep it healthy.

Moving through negative childhood experiences in order to love her hair as an adult is a journey that Alexandra, a Filipino-American retail buyer, understands completely. When she was in first grade, her mom didn’t know what to do with all of Alexandra’s thick hair – so she chopped it all off.

“She buzzed the sides with a mushroom up top,” Alexandra recalls. “It wasn’t great, and I don’t recommend it.”

Since then, Alexandra has worn her hair long, but she struggled with how to style it and properly take care of it. When she hit high school, she began using a straightener and using a plethora of products to keep it in line. Then she switched to a curling iron and began using mousses, gels, and hairsprays to give her hair life, not realizing she wasn’t using the right products for her hair type.

Now Alexandra uses New Wash, which helps not only with her thick hair but her dry scalp. “New Wash has really helped to moisturize my scalp as well as my hair, and the whole hair washing process has become so much easier. My girls with long hair know the struggle when it comes to wash day. It’s a thing.”

These days, Alexandra can be found letting her hair air dry and maybe hitting it with a blow dryer for a couple of minutes just to liven things up. She runs a curling iron through her hair and tops things off with a bit of Hair Balm, and she’s good to go.

A Japanese-American student, Ai is both white and Japanese. “Growing up, it was really hard for me to fit in because I didn’t really know what I was. I wasn’t white enough, because I was Asian – but I also wasn’t Asian enough because I was white. That caused me to struggle with my identity and feel like I had to change it, rather than learn to love it.”

Growing up, Ai went to Japanese hair salons, where the stylists told her that her hair was very thick but also “really American.” Meanwhile, at the American hair salons, the stylists informed her that her hair was “very Asian.” Ai didn’t know what either of those things meant. Another time, Ai put her hair up in a bun and a man came up to her and said, “I like your hair like that. It makes you look really Asian.” Again, Ai didn’t know how to take that.

“I don’t think he meant it in a derogatory way,” she considers. “But it wasn’t a compliment, either.”

As she got older, Ai spent time trying to figure out what she liked when it came to her hair. She’s grown it out, even donating it twice because her hair grows so fast, which is one of her favorite things about it. Her hair is thick enough that it gives her a headache when she puts it up, so she’s learned how to style it down, tucking her curtain bangs behind her ears and letting it do its thing otherwise.

“I’ve learned to love the way my natural hair color looks, too. When the sun hits it, it has a red undertone, which makes me really love it because it reminds me of my grandpa, who is a full-blown redhead.”

Ai relies on New Wash (with a side of Scalp Brush) to moisturize her thick, frizzy hair. She acknowledges that her hair story is ever evolving. “Maybe I’ll color it again someday. Maybe I’ll go blonde. Maybe I’ll chop it again – or grow it out really long. Who knows? But I’ve come to accept my hair and love it for what she does for me and the way she looks. I hope that you can, too.”

Representation matters, and we hope that AAPI readers can see themselves reflected here – and that the rest of us reconsider our assumptions, reject the stereotypes, and expand our awareness of what Asian hair really looks like.

Supporting Forest Restoration in the Andes