Get the Scoop on No-Poo: What it is (and isn’t) 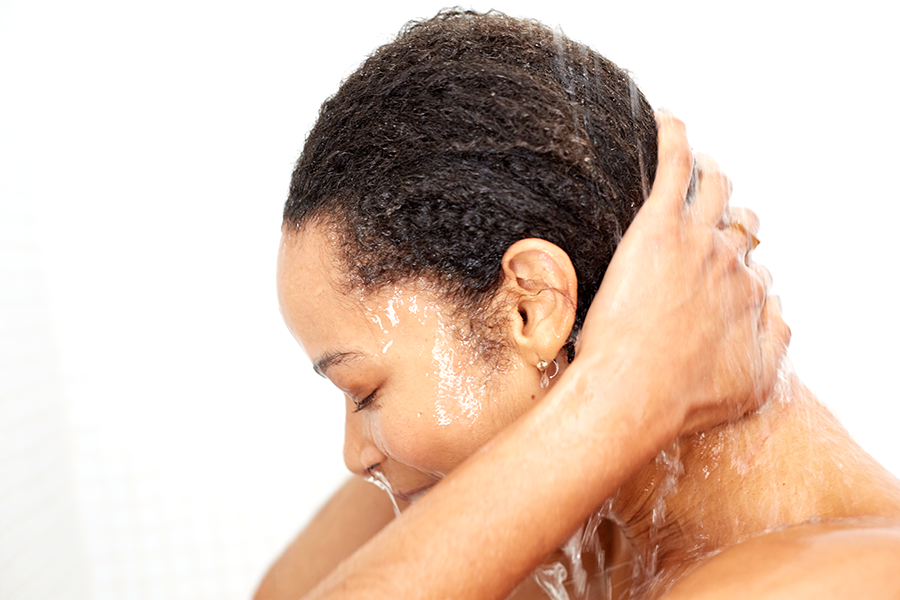 Is it possible to wash your hair without shampoo? Indeed it is, and there are several reasons why you’d do so and several ways to do it.

Along with being forms of eco friendly hair care, no-poo – or shampoo-free – hair washing methods are the first line of defense against dryness, frizz, and fading color, all complaints that can be traced back to the sudsy stuff you’ve likely been using most of your life.

BEHIND THE NO-POO MOVEMENT

Curly-haired people, who are often prone to dryness and frizz, were the No-poo pioneers. Conventional shampoo contains detergents such as sulfates, which strip away healthy oils naturally produced by the scalp to keep hair protected and moisturized. The result is too-clean hair that calls for an often extensive and expensive collection of moisturizing oils, masques, serums, and balms to restore a healthy-looking texture.

Curly-haired folks often choose to put their money on low poo shampoo methods that employ oil-based cleansing methods, among others, similar to what most women use today to cleanse their faces. Oil dissolves oil after all, but not in the take-no-prisoners way that lather can.

No longer relegated to those with curly hair, the no-poo concept is now gaining in popularity because of the increasing concerns over the effects of conventional shampoo on sensitive scalps, fragile hair, and delicate ecosystems.

Many hairstylists and dermatologists have supported shampooing less frequently for a while now but have also been frustrated that so few alternatives existed. “Patients with dry, damaged or tightly curled hair should limit their shampooing to no more than once per week,” advises Crystal Aguh, M.D., assistant professor of dermatology at the Johns Hopkins University School of Medicine and co-author of Fundamentals of “Ethnic Hair: The Dermatologist’s Perspective.”

WHY NO-POO? WHY NOW?

The word “shampoo” is now and forever associated with a liquid that foams when it meets water. Its origin, however, is the Hindu word champu, which means employing massage techniques for health and hygiene. Modern cleansers made the physical massaging action less essential, and like so many household products invented with post-WWII optimism, chemistry did the work for us so we could lounge around in our bubble-baths as advertised.

Through the late 1800s, consumers were advised to wash their hair about once a month. The first synthetic shampoo, created in the 1930s, was recommended for use every two weeks, and daily hair washing didn’t become the norm until the 1970s. Learn more about how we washed hair throughout history here.

But the tide has turned, and our shampoo habits are rapidly changing. Anti-shampoo activists coined the term “No-poo,” to describe new washing methods and joined forces with the hairdressers who have searched for alternatives to regular shampoo and launched a thousand auxiliary products to help hair reveal its innate qualities and natural inclinations in spite of detergent.

The very fact that an entire industry has grown around hair care products designed to reverse the effects of shampoo, a household best-seller, is certainly ironic. In fact, one could argue that there would be no reason whatsoever for rinse-out conditioners to exist without shampoo.

Detergent-based shampoos strip the natural oils from your scalp. While you are tossing and flipping your fresh, clean, silky strands, the hair follicles in your scalp – and all over your body – are hard at work secreting sebum to replace what you just washed away. If you have a naturally oily scalp and fine hair, this explains why it can get so greasy so quickly. You wash, it gets oily, you wash... and you’re stuck in a vicious cycle.

Most of us have no idea what our scalps and hair are really like when left to their own (superior) devices.

The most maligned culprits in the detergent category are the sulfates. Many companies have switched to substitutes hoping to avoid the controversy, but it’s easy to overlook unfamiliar ingredients. If you’re determined to avoid detergent, below are some to keep an eye out for that may also be present in some low poo options – cleansing conditioners where many find a middle ground.

The three most commonly used sulfate compounds are sodium laureth sulfate, sodium lauryl sulfate, and ammonium laureth sulfate. Each compound varies in intensity, as the “-eth” compounds are milder than the “-yl” compounds, and ammonium is milder than sodium. All compounds can irritate the skin as well as strip oils from the hair. One sulfate-free alternative that is extracted from coconut oil is coco betaine, although it’s still a detergent.

Detergents to Watch Out For

Check your labels for these common forms of sulfates and their close cousins, “sul-fakes:”

ADJUSTING TO A NO-POO LIFESTYLE

Once you remove the irritant – detergent – and stop stripping away natural oils daily, the scalp starts to find a more reasonable pace of producing oil. Hair begins to feel healthier, appears less oily, and the need to wash becomes less frequent. Many take comfort in the fact that they’re limiting chemical waste entering our waterways that potentially cause harm to wetlands and wildlife.

Retraining your oil glands can take between 2-6 weeks based on how oil glands can take anywhere from 2 to 6 weeks depending on how serious your shampoo dependency was. This is also a good time to invest in a good-quality boar-bristle brush to help you during the transition to distribute sebum away from the scalp and through your hair down to the ends where it is typically most-needed. You may also want to keep a dry shampoo such as Powder on hand to absorb extra oil without even getting your hair wet.

Consumers’ growing mistrust of commercial hair care is sending them to the kitchen for staples such as baking soda and apple cider vinegar. But many skeptics have asked, is baking soda or apple cider vinegar good for your hair? Some purists have taken a giant step back to square one and adopted water-only washing. Others have found success with super-absorbent clay.

Whatever the method, the Web is spinning with personal success stories and some tales of wavy woe – see washing hair with baking soda – in a truly crowd-sourced conversation. Our friends at theCrude skincare company sum it up this way: “Sudsing cleansers have only been the norm in human hygiene for the last century – before the industrial revolution, humans cleansed primarily with natural ingredients like water, oil, and clay.”

HOW TO GO NO-POO

It’s understandable that you’re imagining how gross not shampooing could be. But our bodies are much better at self-regulating than we give them credit for, and you may be surprised. Yes, you may face some less-than-pleasant oily weeks ahead, but only temporarily; the payoff may be worth your patience.

Start by weaning yourself off of traditional shampoo slowly, and reduce your shampooing frequency to twice per week, then once a week.

On your shampoo-free days, rinse with water, which is sufficient to rid your hair of sweat and everyday impurities.

Develop a massage technique to help exfoliate the scalp of dead skin and build-up of any ingredients from other hair products you may use. Your scalp may feel a little uncomfortable at times but simply rinse with water while scrubbing with your fingertips or a shower brush at the first signs of itchiness – your signal to wash going forward. If you have a naturally dry scalp, flaking dandruff or irritation, it’s important to understand whether you’re just shedding dead skin, which is perfectly normal, or you’re suffering from a more acute or chronic condition that your shampoo use may have contributed to.

For those who want to break up with traditional shampoo but don’t want to pursue the DIY route, you’ve come to the right place. Hairstory New Wash ticks all the no-poo boxes: no detergent whatsoever, and a blend of Aloe Vera and essential oils that both cleanses, conditions, and allows you to wash your hair as often as you need to while preserving your natural sebum. There are 3 versions to choose from so that all every hair types can get on the no-poo train and leave frizz behind.

Spotting Silver Strands? How to Prevent Grey Hair (And Maybe even Reverse it)

What Causes Dull Hair and How to Restore Your Shine

Your Key to Healthy Hair and Scalp: How to Use a Scalp Brush