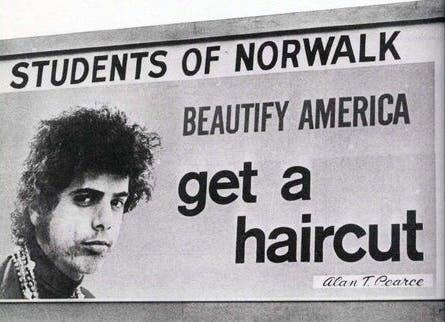 The times: Are they a-changin’? Civil liberty is taken for granted these days, especially in places as prosaic as the American barber shop. We have our hair cut how we want, when we want, and only if we want. But in today’s polarized political climate, do men have a responsibility to take a deeper look in the mirror?

Our forefathers weren’t so flush with our luxury of choices. A few examples: Eighteenth century men didn’t dare grow beards (moustaches are another story); Joshua Evans, an American Quaker was avoided by friends and enemies alike because of his “alarmingly eccentric” beard. When bearded Joseph Palmer moved to Fitchburg, Massachusetts In 1830, women crossed streets to avoid him; his windows were repeatedly broken; children assaulted him with stones, and the church refused him communion. Four men threw him to the ground attempting to shave his face, and after fighting them off he was arrested and imprisoned for a year. In 1850, journalist John Waters wrote about the beard, “There exists no right whatsoever to exhibit to the community a disgusting object of this sort; upon every principle it ought to be abolished…” His Majesty the Emperor of all Russias issued a proclamation the same year citing “the detestable usage of beards,” and called for an end to this “indecent and subversive innovation.”

Fast-forward to 1966: A New Jersey school committee decreed that boys with ducktail or Beatle hairdos be barred from classes. A boy in Los Angeles was convicted for disturbing the peace for refusing to cut his hair. In 1970, a long-haired teen was admitted to hospital in serious condition after being scalped for being un-American. Beards, moustaches, and long hair were banned by law or regulation in Cuba, Argentina, Greece – and Disneyland. Billboards in the American countryside encouraged men to “Beautify America; Get a Haircut.”

So we did, and we still do – barber shops are booming. But one popular haircut is raising hackles and risking outrage. Imagine sitting in the chair debating the finer points of fade versus buzz, razor versus scissor, or pomade versus wax over a double-shot soy latte in an innocent moment of vanity. But what if your choice of “Short Back & Sides” that men have worn innocuously for decades invites suspicious glares when you step outside?

The Undercut, High Fade, Bald Fade, Hard Part, High & Tight – all are names for a cuts involving a marked contrast in length, usually buzzed close to the scalp on the sides and nape, and left longer on top (‘disconnected’ in technical terms). The cut originated in Victorian England, and was the norm for men in much of the 20th century for reasons of basic utility: Headwear. Soldiers were able to wear helmets more comfortably, and since few civilians went outside without a hat until the 1960s, short hair around the hatband was immune to creases and muss. Historically, the Undercut – like the basic bowl cut – has been associated with unskilled barbering; more elite haircutters were trained in subtler blending techniques. It was a staple for young working class men, and a trademark of street gangs, as long hair was a liability in a street fight: In Glasgow, Neds – precursors to Teddy Boys – wore undercuts, as did Scuttlers of Manchester, and Peaky Blinders of Birmingham (inspiration for the Netflix series widely credited with the cut’s resurgence, along with Michael Pitt’s character Darmody in HBO’s Boardwalk Empire). 1980s New Wavers and synthpop fans revived it; so did indie kids and skaters in the 2010s. More recent adopters include athlete David Beckham, rapper Macklemore, disc jockey Skrillex, and Arcade Fire singer Win Butler. You see it now on Wall Street, and it is more and more common on Main Street.

But, clean-cut guys motivated merely to recoup an old-school masculinity are having their style choice viewed with suspicion. The Undercut – referred to in ironic air-quotes (or sotto voce) as the ‘Hitler Youth’ for years – is now being referred to as the ‘Fashy Haircut’ (short not for fashion, but for Fascist) because of its association with WWII Germany, Wehrmacht soldiers, and Hitler’s own head.

White nationalists who are coming out of the woodwork – enabled, some say, by our new administration – such as Richard B. Spencer, 38-year-old coiner of the term ‘alt-right’, and head of the National Policy Institute and Radix Journal (organizations that promote white identity and the creation of an “ethno-state”) have been accused of appropriating the undercut and popular, hipster style in general. Spencer is conspicuous for his calls to bar interracial relationships, and taking “sadistic pleasure” in “getting under the skin” of protesters as he urges supporters to “Party like it’s 1933.” But he also wants to blend in and make extremism appear less extreme.

Does the power of this haircut lie in its adoption by people seeking to consolidate power? While we hear Spencer’s chants of “Hail Trump,” we also hear echoes of “Feel the Bern” by young, Sanders supporters, many fitting the hipster label. Women along the queer spectrum adopted the relative androgyny of the undercut, seen on iconic pop singer Miley Cyrus (left), and Australian actress and DJ Ruby Rose (right). One online commenter writes, “It’s a fundamental staple in lesbian coif. We all know it and love it, not only for its edginess but for its ability to help us identify queer ladies out in the wild. One of my favourite jokes is: “What do you call a straight girl with an undercut?… A liar.”

An article posted by Connie Wang on Refinery29 reports straight, left-leaning women swiping left on the dating app Tinder when they see guys with Undercuts – one more mental filter against creeps and predators. “I never know now if it’s a white guy who’s trying a little too hard to be hip, or an actual neo-Nazi,” says one. On the other hand, commenters on alt-right websites think the uproar is hilarious and absurd: “You know what else Nazis wore? Pants.”

Are the oppressed adopting a symbol of oppressors? Or are oppressors appropriating a symbol of heritage? Is this a case of pointing trigger-happy fingers? Fake news? Liberal hypersensitivity? Do we need to change the cut or change the conversation? Or when all is said and done, is it just a haircut?

We invited Hairstory Hairdressers to weigh in.

“As much as I love using aesthetics to announce oneself, if we lump people together when it comes to politics we’re missing the point. This issue is bubbling up because we need to have more conversations about individuality. I’m a white man with a shaved head who wears a stocking cap, and some people might assume I’m a Skinhead, but it’s a practical choice for me because I don’t have much hair. I’d hate to be seen as a symbol of anything, and starting with assumptions is where tension comes from. A style choice could be political, but a guy with an undercut may have bulky hair, or can’t afford a haircut so often, or their girl- or boyfriend might have enough skill with clippers to do it at home. Be curious. Have an individual conversation. If we did that more, we’d have more empathy.”

“Groups have always represented themselves by how they look, and it’s unfair to take this to such an extreme. If you have tattoos, are you part of a motorcycle gang? This seems like a cancer that grows on itself; lots of cultures have defining looks; it reminds me of the dreadlocks controversy with Guido Palau for Marc Jacobs. To get so sensitive about it misses the point; the issue is the mentality behind it. To assume that everyone with a high-and-tight haircut is a Nazi is small-minded. Calm the F down!”

“Any haircut has its roots in something utilitarian or fashionable; the bob was about liberation, but it was also about safety when women went to work in factories. I have been giving men that haircut for more years than I would like. There was a moment when it came back as new and cool, and the only thing I dislike at this point is that it’s not unique; it doesn’t tell a story anymore. There was a time when you saw tattoos, piercings, crazy colored hair and understood them to be a part of a subculture or a sign of belonging to a group. Now, everyone has tattoos. Everyone has piercings. I think the cut is too mainstream now to have meaning. I can remember when I worked at a barbershop on the Lower East Side and someone specifically asked me for a Hitler Youth haircut, and I said, “I understand the haircut you’re asking for, but we’re going to call it something else, okay?”

Supporting Forest Restoration in the Andes

Giving Back: Counting Coral and Hairstory